How did the tin can evolve?

To make the body, a piece of tinplate was bent into shape on a roller and the overlapping edges were soldered together. Two round disks were cut for the ends, their edges were bent down, or flanged, and they were soldered to the body. The top could be soldered on after the can was filled, but more common was the hole-in-top can. A top with a circular hole about an inch in diameter was soldered on before the can was filled, food was pushed through the hole, then a cap with a small vent hole was soldered over the opening. During processing, when a sufficient amount of steam had escaped, the vent hole was closed with a drop of solder. The soldered hole-in-top can changed little in style through the 19th century, but even before the Civil War its manufacture was partially mechanized".
"A primary and long lasting feature of the early canning industry was the introduction of the hole-intop can. Using this method, the can was filled and then covered with a lid having a hole in the center. After boiling, the can was closed with a drop of solder. Hole-in-top cans were, initially, completely handmade by cutting and soldering of the tops and seams. In time, machine cutting and soldering were introduced. Soldering was replaced by crimping and hooks, although solder was also used as a reinforcement of these seals on some cans". Numerous refinements were made in the can industry prior to replacement of the hole-in-top by sanitary cans. These refinements can be classified as transition cans but are encoded as hole-in-top cans.
Tin Cans - Sanitary (open-top) : "The most radical change in can history was the switch from the hole-in-top can to the sanitary can. The sanitary or open-top can was initially developed in Europe, where can ends were attached to the body by hand crimping the edges together, with a rubber gasket in between to make the seam airtight. In 1896, in the United States, Charles Ams patented a sealing compound of rubber and gum to replace the rubber gasket. By 1897, the Ams Machine Company brought out a machine that applied this compound to can ends automatically and crimped the ends to the body in a double seam, an improvement over the single seam used in Europe. With the crimped, or locked, double end seam, locked side seams replaced lapped side seams. For a lapped seam, solder was applied to the body edges which were lapped over each other while hot. The lapped side-seam fit the flanged, soldered-on top better than the locked side-seam, which was not perfected until the 1900s. For a locked side-seam the edges are crimped together and soldered on the outside only, leaving no external ridge. The new can was considered more sanitary because it was soldered on the outside only. 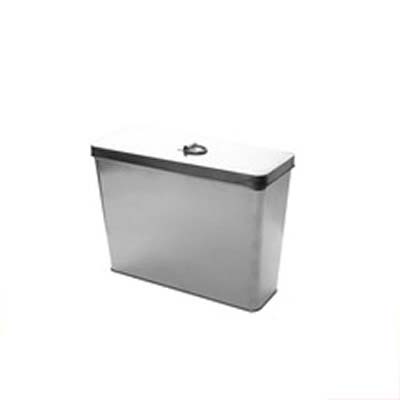 Share to:
The effect of tin in the tin box on the human body and the environment
2017 India Chinese home gift Exhibition